How to enjoy your "Shukubo" (temple stay) 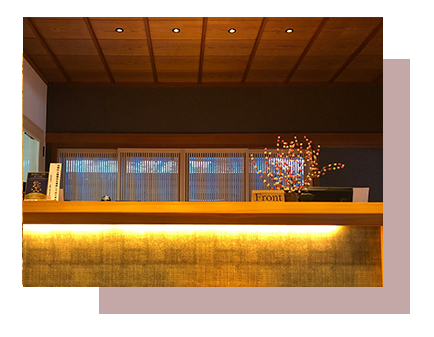 At Fudo-in, you can enjoy your meals with a great view of a beautiful garden, attend the morning devotional service, practice sutra copying in a quiet environment, far away from any traffic. A stay at the Fudo-in will be an "ultimate healing experience" which only this historic temple can offer.
*Please refer to the pictures of our guest rooms, bathrooms, dining hall, and other facilities. 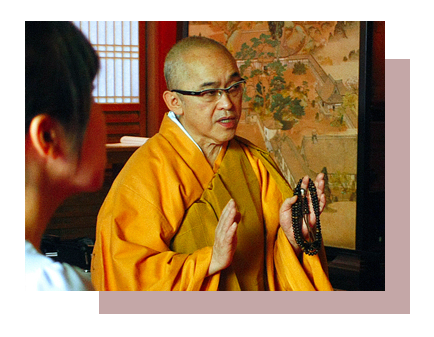 What is Buddhism? Buddhism dates back to about 2,500 years ago, when an Indian prince, Gautama Siddhartha reached Nirvana (the Buddhist enlightenment) and became a Buddha (The Awakened One) in India. Buddhism, therefore means, "following the teaching of Buddha". It is also a solution to human suffering through spiritual training. In this sense, Buddhism is about "teaching the way of the Buddha and becoming a Buddha". Buddhism spread from India to China, Mongolia and their neighboring countries via Central Asia (Northern Buddhism), and reached Japan around the 6th century through the Korean Peninsula. It also spread from India to Ceylon (Sri Lanka), before it reached Burma (Myanmar) and Thailand in the 11th century (the Southern Buddhism). Amongst the variations of Buddhism that spread all around the world, Shingonshu, based on the teaching of Kobo-daishi Kukai, is a type called "Mikkyo" (Esoteric Buddhism). "Mikkyo" means "the teaching the way of revealing Buddha's hidden ideas". This teaching had already existed in Siddhartha's India, before it gradually began to spread systematic around the 7th century and came to be accepted in China and Tibet in the 8th century. Kukai introduced this teaching to Japan and developed it into Shingonshu.

What to See in Fudo-in?

The Kisen-garden was renovated in 1989. This garden offers a nostalgic atmosphere with fascinating trees in every season, singing birds, and the sound of water coming out of valley rivers, making you realize how far away you are from the maddening crowds of city life. The ultimate quietness at the bottom of the valley is all yours. 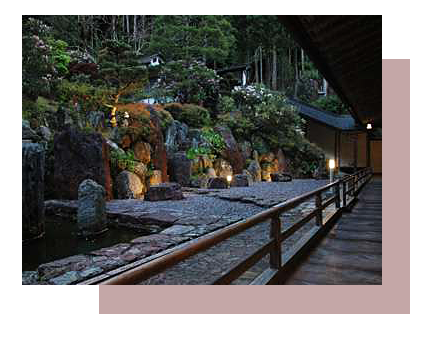 Since the Empress of Emperor Toba, Bifukumonin (1117-1160), was buried in the West Valley mausoleum, now called, "Maruyama Goryo", Fudo-in has been in charge of this mausoleum. 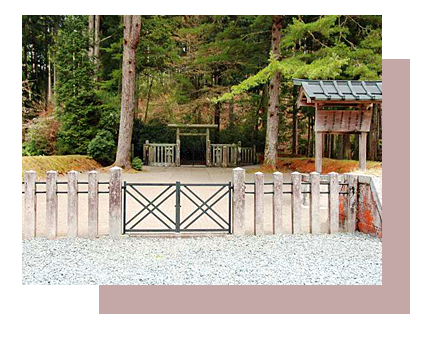 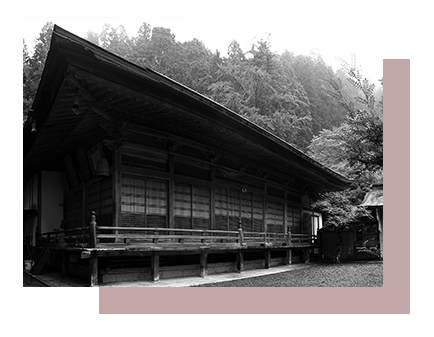 THE GRAVES OF THE IMPERIAL ARMY PRACHUTIST OFFICERS

"Carrying the flowers on our shoulders/We'll shoot the sky and color the clouds/With no regrets about my death just right there/We'll finish like these flowers". On the gravestone, there is only one word carved, "Sora" (Sky), to mourn the deaths of the parachutists. Every September, the memorial service is held by All Japan Air Pegasus (the ex Imperial Parachutists). The graveyard is located to the right of Ichino Hashi at Okunoin. 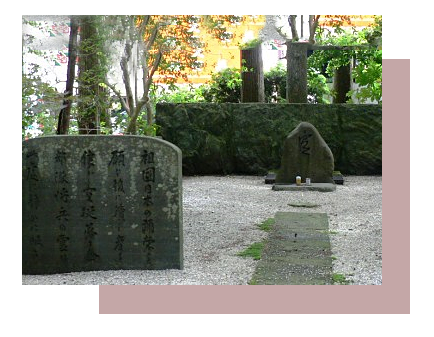 Meals are served at the Shoin , facing the Kisen-garden, or at one of Wakayama Prefecture's cultural assets, the Kuri (temple kitchen, quarters of the head priest). 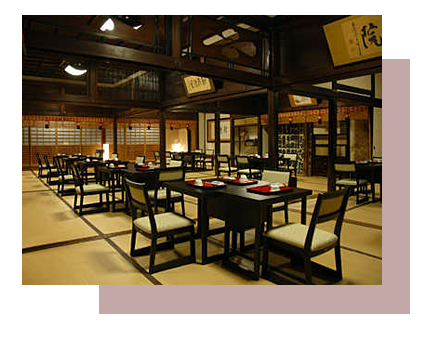 This study or lecture hall offers a very quiet environment for you - a perfect space for your meals and transcription of scriptures - with springtime greenery, summertime cicadas and changing foliage in autumn. 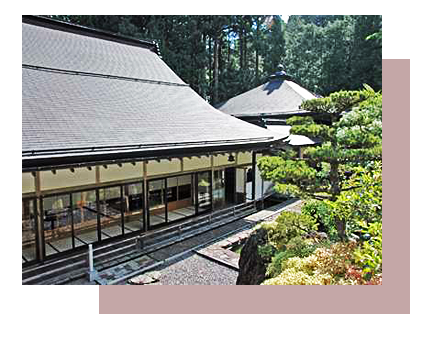 With time, Koya-san has also changed significantly. You will realize how historical Koya-san is, by looking the pictures of Koya-san drawn on the sliding paper doors in the room. 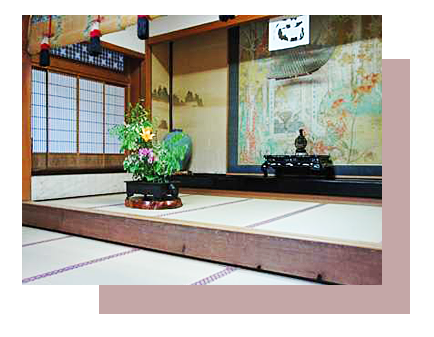 Come here in May. You will be amazed at the Rhododendrons in full blossom in the garden. 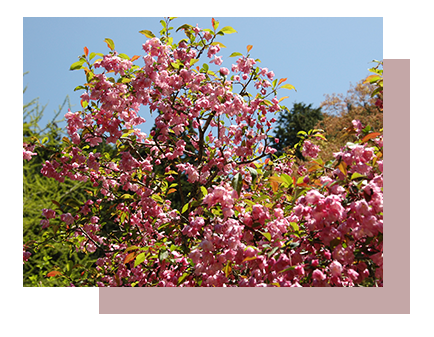 
Koya-san as a World Heritage Site

On July 7th, 2004, Koya-san was registered on the World Heritage list as "a sanctuary of the Kii Mountain Region and its trails. Many people from all over the world, including the pilgrims knocking on the doors of "88 Great Temples of Shikoku", pay a visit to Koya-san on a daily basis. There is a sanctuary that cordially welcomes visitors any time, any day, with a Buddha-like compassion - That is the true picture of Koya-san. 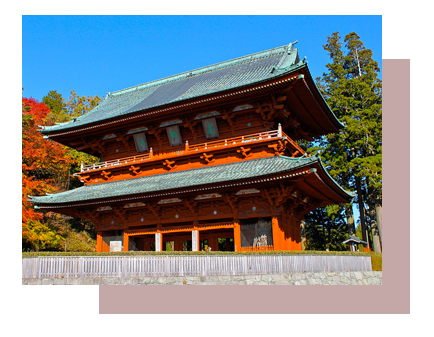 Koya-san is a mountain area chosen by Kobo-daishi as a Buddhist training centre for Shingon Mikkyo about 1,200 years ago (in 816) and the core of all Shingon temples, whose locations are found at 1,000m above sea level, which is higher than another Buddhist sanctity, Hieizan (Mt. Hiei). The two wooden monoliths, designated as culturally important properties by the state, at the Main Gate, say, "Hibi no yogo o kakasazu shite, shojo no iseki o kenchi su (I visit anyone, any place, anyday, to see and learn from historic sites everywhere", which indicates that Kobo-daishi's belief and determination to go to any place and help anyone in trouble with his two dicsiples. On top of the mountain is a basin shaped valley, where there is a sanctity called "Danjo Garan". At "Danjo Garan", many halls and towers, along with Buddha statues and "mandala" (Mikkyo paintings), welcome visitors. Okunoin is found in the deep forest of cedar trees, where there are many people's graves. 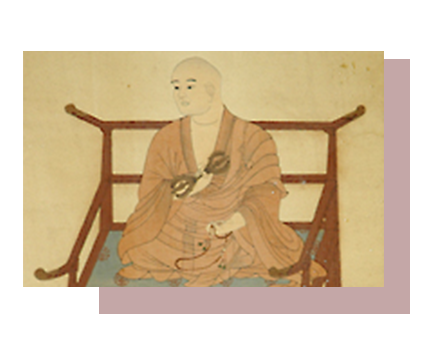 Kobo-daishi was born in what was then known as "Sanuki" (Kagawa Prefecture today). He started learning classical Chinese studies and history as early as at the age of 15 and then went on to read Chinese classics and Confucianism at the Department of Literature at the national university in the capital city when he was 18. While diligently following the elite path, he met a famous monk and took a tutorial with him on Kokuzo-Gumonji (a Mikkyo method), the experience which was the beginning that led Kobo-daishi's life to change radically. In 804, Kobo-daishi became a monk at 20 and was chosen by the state as part of the first cultural mission led by Kadonomaro Fujiwara to Changan, the capital of the Tang Dynasty. Kobo-daishi was taught the orthodox Mikkyo by a high monk, Keika, and was the eighth monk to be honored with a "Ajari Henjo Kongo" title during his 2 year stay in the capital, before he returned to Japan in 806. As soon as he reached Japan, Kobo-daishi began to go around the country and put a huge amount of effort into spreading the Shingon Mikkyo teaching everywhere. In 811, Dengyo Daishi, the founder of Tendaishu Buddhism, became a disciple of Kobo-daishi, and helped push Kobo-daishi's fame among the Japanese Buddhists and in the imperial palace of Japan. A large number of people came to Kobo-daishi and asked him to make them his disciples, finally leading to the establishment of Shingonshu.

In 816, the then Emperor Saga endowed him with Mt Koya. Kobo-daishi brought many of his disciples and carpenters to the mountain to have them organize and construct the Buddhist mountain. Koya-san Kongobuji was the result of their work. In 823, the government ordered him to take charge of Toji (the Eastern Temple of Kyoto). Since then, Toji has been used as both the main training centre of Shingon and its main philanthropic institution. The government ordered that Toji accomodates 50 monks on a permanent basis, ban monks from other sects from living there and focus on the monks' Mikkyo study.

In 826, Kobo-daishi opened a school called "Shugei Shuchiin" for the public to the east of Toji. The school admitted anyone, regardless of his/her social class or wealth. His contribution to Japanese culture and infrastructure is also noteworthy: Kobo-daishi was a great calligrapher, painter and sculptor; he invented "Iroha character system", discovered hot springs, taught the use of coal and petrol, funded the Mannoh pond work, and made bridges and roads. For this reason, Kobo-daishi was called "The Mother of Japanese Culture". He died in 835 and was buried at Okunoin on March 21st the same year, in accordance with his will. After his death, Kobo-daishi's high disciple, Shinnen Daitoku saw the successful construction of Garan and established Koya-san as one of the most important Buddhist training centres. Currently, there are 117 temples as well as Garan and Okunoin on the mountain, making it as a mysterious and inspirational core.

The Story of Koya-san 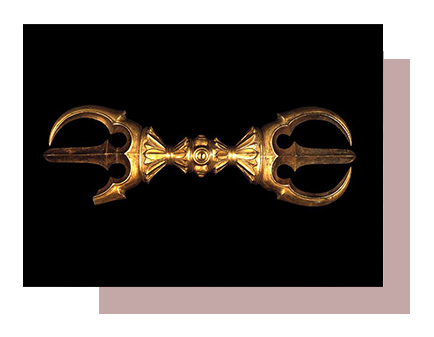 A famous story has been told as to how and why Kobo-daishi chose this area, so far away from the capital and at 1,000m above sea level, as a sanctuary.

After 2 years of studying hard, Kobo-daishi was about to leave China from a beach in the Ming province and was already thinking deeply about where his Garan should be built, so he threw his "Sanko" (three headed harpoon, a Buddhist tool) into the air, praying that the best site be found. The "Sanko" flew in the sky and landed where Garan currently stands. Kobo-daishi looked for the "Sanko" everywhere and went to Uchi county in Yamato (Gojo city in Nara Prefecture today). There, he met a 2m tall hunter with a reddish dark face, an arrow in his hand and two dogs, white and black. Kobo-daishi was led by the dogs to cross the Kino River and go deep into a steep mountain. Out of nowhere, a woman appeared and said to Kobo-daishi, "I am the master of this mountain. I will help you". With that woman, Kobo-daishi went even deeper into the mountain and found himself on a plateau shaped like the back of pot. He saw a pine tree. There, he found his "Sanko" hanging on the tree! It was then that he was convinced that the place was the best for his Mikkyo project and decided to open a Shingon temple. The woman whom he met was the goddess enshrined at Nyutsu Hime Shrine in Amano village at the mountain foot. The hunter was also enshrined by Kobo-daishi as "Kariba Myojin" (the god of hunting).